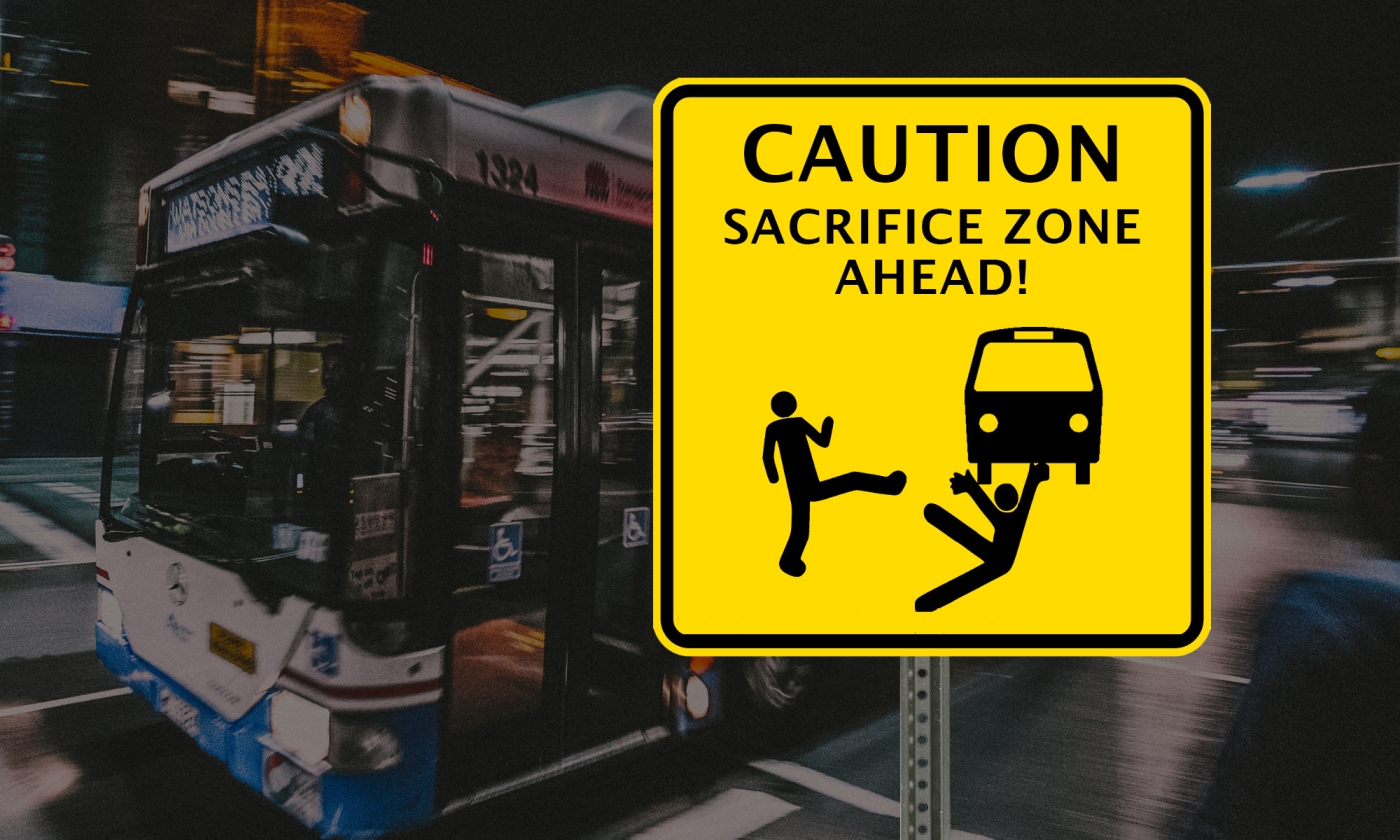 “The creative” — which, if you are not quite familiar with the vernacular — refers to the materials produced by the creative department of a marketing entity.

The creative is a product of everything that went into it, such as research, strategy, audience selection, media planning, data modeling, along with a lot of midnight oil. Since the work is what actually touches the consumer, you can say the creative is where the rubber meets the road. Alas, it is never an easy road, mainly because there is a lot of traffic in the form of competition, all jockeying for the consumer’s attention.

Parked along this road, with its engine running, is the Sacrificial Bus. When campaigns don’t live up to expectations, subject lines don’t get opened, landing pages don’t get landed on, and the sales funnel shrinks to the diameter of a cocktail straw — that’s the time to watch out! That is when “The Creatives” (the Copy and Design Directors responsible for creating the work) are frequently, and mercilessly, tossed under the bus.

You can see why creative folks make easy targets. They are the last to touch the work, and the work itself is the most tangible embodiment of all the prior thinking from the other disciplines that went into it.

Frankly, I’ve been tossed under the bus once or twice myself so I know what it feels like. It isn’t pleasant, as you can imagine, having fingers pointed at you for something you do not feel entirely responsible for. Not to mention the shock of finding oneself tossed in the headlights of the Sacrificial Bus as it heads straight for you like a snorting bull in the Plaza de Toros in Spain.

Make no mistake, the allusion to a bull is apt because singling out Creatives who are the endpoint of a much larger process is plain B.S. A day came, however, when I had had enough of playing the victim. And on that day I rose up with all the passion of Emile Zola defending Dreyfus:  J’accuse!

“Wait a second,” I thought to myself. “The campaign my team and I developed couldn’t be more on strategy if it was welded to it.” Clearly, I realized, there was something more fundamental going on. Maybe the research was off? Or the audience selection? Or the media placement? And maybe — are you ready for this? — maybe the data we were basing the campaign on just, well… sucked?

“The data?” the head of analytics shot back. “You’re the Creative Director. Let me worry about the data.”

“Everything we do is driven by data, isn’t it?” I asked. “Who we’re talking to? When we should talk to them? That being the case, what could be more vital to the success of our programs if it isn’t the data?”

“That’s true,” my colleague agreed. “But what do you know about regressive analysis, statistical validity and playing with SAS rotations? Absolutely nothing. Stick with the messaging and the user experience,” was his advice. And with that he turned and walked away, vanishing into a sea of servers and analytical dashboards flashing on a bevy of computer screens.

Sometimes you know you’re barking up the right tree when the tree gets defensive. I realized there was a lot under the data tree that needed to be explored if consumer data was going to be genuinely supportive of creative development.

Look at it this way. If you are drilling for oil and the drill never reaches the reservoir, what good is the rig? It needs to go all-the-way-through to the source to be of value. The data I was working with revealed nothing about the prospects I was supposed to win over — because it didn’t go to the source. It didn’t reach into the hearts and minds of consumers or reveal any psychological truths. That goes deeper than knowing their “mindset.” It means having an understanding of what may have created their mindset in the first place.

It also means looking beyond so-called ‘personas’, ‘cohorts’, ‘avatars,’ and the like. Because, what good is a face without legs? No matter how plausible or compelling it sounds, a stand-alone portrait that is disconnected from a total end-to-end data solution can serve no greater marketing purpose unless it is connected to the way people intrinsically make decisions. Otherwise, you might as well frame it and hang it on a wall. What is the underlying premise on which these biographical fictions are founded? And, to what degree can these idealized conceptions of individuals be revealed in the data itself? These are the questions that need to be asked.

Throwing Creatives under the bus is a sure sign that that organization is not as marketing or data savvy as it needs to be. The truth is, the best consumer data has heuristic value. It can inspire better and more strategic thinking, and make the creative process easier as well as more empirically-based.

That is the reason CMOs and Creative Directors need to reach across the aisle and re-think how data can support their initiatives. And, it is one sure way to let the air out of the tires on the Sacrificial Bus that we at Minds+Motives urge creative leaders to begin to consider.